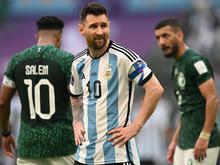 Messi gave Argentina an early lead with a penalty kick in the Lusail Stadium (10th minute), after the break Saleh Al-Shehri (48th) and Salem Al-Dausari (53rd) turned the game around within five minutes in favor of the outsider.

Argentina were disallowed three goals in the first half for offside positions, even after going behind the Albiceleste were unsuccessful against the consistently defending Renard team.

Argentina missed the long-awaited record, which is now only held by Italy: with a draw, the South Americans would have remained unbeaten in their 37th game in a row. (dpa, tsp)