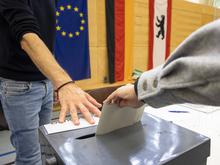 Berlin wants to spend a lot of money to avoid further mishaps in the repeat election and the announced payment of 240 euros for election workers is already having an effect. Many people have already registered for February 12, said Interior Senator Iris Spranger (SPD) on Monday at a special meeting of the Interior Committee. Many inquiries were received every day, not only from Berlin, but also from all over Germany.

State returning officer Stephan Bröchler said that 26,000 people had currently applied to be helpers. One of the twelve districts has already stated that enough election workers have already signed up. The tax-free 240 euros would certainly contribute to this, said Bröchler. Previously there had been an expense allowance of 60 euros. For officials and employees of the country there should even be up to three days off as compensation for their work as election workers, said Spranger.

In 2021, the Senate had promised election workers early corona vaccinations. As a result, helpers signed up and got vaccinated – but “a not inconsiderable part” canceled their helper assignment shortly before the election, said Bröchler. Therefore, this time the increased payment should only be paid out after the polling stations have closed.

You are also prepared for water damage

Up to 43,000 poll workers are to be deployed. That would be significantly more than in the breakdown election in September 2021, although this time only the House of Representatives and the district assemblies and not the Bundestag should also be elected.

Bröchler announced that there should be more voting booths in the polling stations, more laptops, cell phones and significantly more printed ballot papers than voters actually expected. The ballot papers are transported earlier, the boxes are better checked and documented, there are contacts with the fire brigade in emergencies and people are also prepared for water damage. In many citizen registration offices, state employees are already so busy with the preparations that normal tasks can no longer be processed, Spranger said.

Bröchler called the organization of the repeat election to the House of Representatives on February 12 a “Herculean task”. The period of 90 days for preparation is “very short”, otherwise you have a year to do it. The task now is to ensure that the repeat elections function smoothly and that elections “become a celebration of democracy again”. It’s also about Berlin’s reputation, said Spranger.

In the special session of the Interior Committee, Interior Senator Spranger also announced that Berlin would request OSCE election observers for the repeat elections to the House of Representatives and the twelve Berlin district assemblies.

Berlin before the re-election

Berlin’s state returning officer in an interview “We assume that we will need between 38,000 and 80,000 election workers” After the verdict, the election campaign begins Who do Berliners still believe after the breakdown election? Bettina Jarasch before the Berlin election “To prevent another disaster, we need radical administrative reform”

Berlin’s Constitutional Court ruled last week that the election to the House of Representatives had to be repeated in its entirety due to many mishaps. (dpa/Tsp)