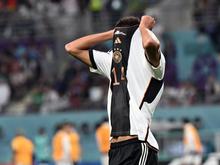 The jersey of the German national team is apparently less environmentally friendly than the manufacturer Adidas has previously claimed. According to research by the weekly newspaper “The time’ and the Hamburg newsletter magazine ‘Flip“ the jersey releases an average of 68,000 microplastic fibers in the first five washes. Both media had previously researched the supply chains of the material and commissioned scientists from the University of Hamburg to examine the jerseys.

“That’s really impressively bad,” quotes “Zeit” from the head of the microplastics research group at the University of Hamburg, Elke Fischer. “These fibers end up with the waste water from our washing machines in the sewage treatment plants, which are not able to filter it all out.” This would mean that microplastics would go straight into the sea via the rivers.

Adidas has announced that it will largely switch to recycled materials by 2024. “As part of our sustainability efforts, we are working hard to avoid microfiber abrasion,” a spokesman said on Wednesday. The group is working with Parley for the Oceans to do this.

The environmental protection organization collects plastic waste for Adidas on “remote islands, on beaches and in coastal regions” such as in the Maldives. The manufacturer sells the national jersey with the note: “This garment was made with a yarn that consists of 50% Parley Ocean Plastic.”

Parely for the Oceans reconsiders collaboration with Adidas

In response to the media scrutiny, Adidas stated that the plastic waste used in the manufacture of the national jerseys comes from Thailand. According to the report, Parley for the Oceans is not active in the country.

The head of the environmental organization, Cyrill Gutsch, is shocked. “If the allegations are true, I must insist on the resignation of the responsible managers at Adidas in order to continue the partnership,” said Gutsch. “Otherwise I have to question the contract.”

Adidas: Child Labor in the Philippines?

According to the sporting goods manufacturer, among other things, ocean plastic is collected in the Philippines, which is used in other products apart from the national jerseys. According to the media report, however, school-age children collect plastic waste in this supply chain, which is then sold to Adidas suppliers.

More about the World Cup in Qatar

The group announced that no child labor would be tolerated and that the suppliers would be checked quarterly. The last check in November 2022 would have found “no indications of underage employment”.