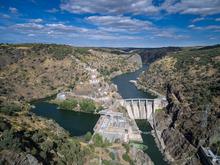 Who hasn’t dreamed of moving from the city to the country and starting a new life there? With own house, garden surrounded by a beautiful landscape. And maybe also in the south of Europe, where the climate is often much more pleasant than in the north of Europe, especially now, in the cold season.

In Spain’s deep province not only many houses are offered at reasonable prices, but even entire villages. For example, a few days ago, a small town called Salto de Castro in south-west Spain, right on the Portuguese border, which had been abandoned by the residents, was up for sale – for 260,000 euros.

The desire for country life also seems to be growing in Spain, because the real estate agent has been overrun with offers. “We have received inquiries from all over the world,” reports Romuald Rodríguez, real estate consultant for the previous village owners and representative of Royal Invest Madrid. “Interested parties from more than 20 countries have contacted us.” They offered up to 600,000 euros for the ghost village.

Interested parties from more than twenty countries have contacted us

In the end, a Spanish contractor was awarded the contract. However, not for 260,000 euros. But because of the huge demand, he had to increase his purchase offer a little, to 300,000 euros. The entrepreneur, who is active in the construction of apartments and hotels, wants to revitalize the abandoned village with a tourism project.

However, the 300,000 euros that have now been agreed for the entire settlement are still considered a bargain price. Because for this sum you can find at best a tiny apartment in Spain’s cities of Madrid or Barcelona. But with the location now on offer, the buyer got much more than just an apartment. Because the “magnificent village”, as it was called on the Spanish real estate portal Idealista, included 44 apartments.

Also included in the price were: “A bar, a church, a school with several classrooms and an inn.” The village, which once had 200 people, also has an old police barracks, a swimming pool and a sports field. All this with a beautiful view of the Castro Dam on the Duero River below, which meanders picturesquely through the Los Arribes del Duero Natural Park.

The nature park around the Duero valley is a popular destination, which is known for its productive vineyards, but also for its abundance of animals. Storks, vultures and eagles have their home in this unique landscape. The village of Salto de Castro is located in the extremely sparsely populated province of Zamora, which in turn is part of Spain’s loneliest but largest region, Castilla-Leon.

But there is a catch: the village has been empty for over 30 years. The buildings have fallen into disrepair. The foundations are still standing. But looters took everything that wasn’t nailed down. The roofs have collapsed and the walls are covered in graffiti. In order to bring the sleepy village of ruins back to life, at least two million euros must be invested, writes the industry portal Idealista.

Any activity that revitalizes the economy in this region is welcome

The previous owners, who bought the empty village two decades ago, already had plans to turn the ghost town into a tourist resort. “But the real estate crisis in 2008 stopped the plans,” reports real estate consultant Rodríguez. In the meantime, the crisis in which banks and construction companies collapsed has been overcome. But the village owners now wanted to retire and therefore sold the property.

Originally, the place Salto de Castro was built for the workers of the Castro dam together with the power plant. The plants were built here, on the Duero River, 70 years ago. In 1989 the last resident moved out.

So now there is a chance that a little life will move into this remote area again. For Sergio López, mayor of the neighboring municipality of Fonfría, which is also very small and twelve kilometers away, this would be the best news in a long time. “Any activity that revitalizes the economy in this region is welcome.”