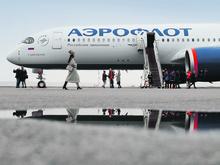 According to Internet data, after the announcement of partial mobilization in Russia, the Demand for one-way flights.

Statistics from Google Trends show a spike in searches for Aviasales, the most popular Russian website for buying flights.

Direct flights from Moscow to Istanbul and Yerevan in Armenia – both destinations that allow Russians visa-free entry – sold out on Wednesday, according to Aviasales. Some routes with intermediate stops, including those from Moscow to Tbilisi, were also unavailable.

The cheapest flights from the capital to Dubai cost more than 300,000 rubles (equivalent to just under 5,000 euros) – about five times the average Russian monthly wage.

According to the head of the Defense Committee in the Duma, Andrei Kartapolov, the restriction on freedom of travel primarily affects vacations abroad. “You can continue to go to Krasnodar or Omsk on a business trip, but I wouldn’t advise you to go to Turkish resorts – it’s better to relax in the resorts of Crimea and Krasnodar region,” the deputy said on Wednesday. Flight bookings to Turkey, for example, were no longer possible on Wednesday on relevant portals on the Internet.

Russia’s President Vladimir Putin had previously called for partial mobilization in Russia against the background of the protracted war of aggression against Ukraine. 300,000 reservists are now to be drafted into the Russian army. The responsibility for organizing the conscription lies with the regional governors and the individual district military replacement offices on site. (Reuters/dpa)