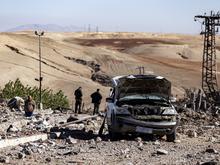 There is no question that one is not limited to air operations, “a decision must be made on how many forces from the ground forces have to participate, and then steps are taken,” Erdogan said, according to the state news agency Anadolu on Monday. He wasn’t more specific.

Turkey took action against the YPG and the banned Kurdish Workers’ Party PKK on Sunday night with numerous airstrikes in northern Iraq and northern Syria. At least 35 people were killed, the Syrian Observatory for Human Rights reported. Kurdish militias had announced retaliation.

On Sunday and Monday, Turkey reported shelling with dead and injured on the border with Syria. Three people were killed and six injured in the province of Gaziantep, Interior Minister Süleyman Soylu said on Monday.

The governor of Gaziantep blamed the Syrian Kurdish militia YPG for the shelling. Kurdish activists and the Syrian Observatory for Human Rights reported exchanges of gunfire with Kurdish militias and heavy Turkish shelling in rural northern Aleppo region and in Kobane.

The Turkish government linked its airstrikes to an attack on Istanbul’s Istiklal shopping street a week ago on Sunday. She sees the YPG and PKK as masterminds behind the attack, both of whom had rejected it. The investigations in Turkey are still ongoing.

The Turkish government classifies the YPG and PKK as terrorist organizations. Among others, Federal Agriculture Minister Cem Özdemir (Greens) had sharply criticized the Turkish attacks on Kurdish positions. He wrote on Twitter: “Erdogan’s bombs on Kurds, which successfully fought IS terrorists, are intended to distract from the economic disaster in Turkey.” (dpa)