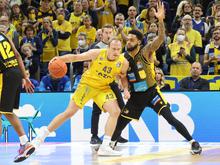 Things are looking up: after beating Ludwigsburg in the Bundesliga, Alba Berlin wants to get back on the road to success in the Euroleague against Belgrade. After three wins at the start, the Berliners lost five games in a row on the international stage. On Tuesday (8 p.m. / Magentasport) Red Star Belgrade comes to the Mercedes-Benz Arena.

“An important win because we beat good opponents who always gave us problems. But we stayed true to our game,” said sports director Himar Ojeda after the hard-fought 99:91 against strong Ludwigsburg. “I hope that the win has given us self-confidence and that we will perform better in the Euroleague than we did last time,” said the Spaniard. Last week’s appearance at Real Madrid (72:90) in particular seemed powerless.

Read more about good sport from a local perspective! In our weekly newsletters from the twelve Berlin districts you will find everything about local sports, local politics and culture. Order here for free.

The return of captain Luke Sikma, who was injured in Madrid, helped the Berliners. With 11 points, 10 rebounds and 10 assists, the forward put on a rare triple double, double-digit statistics in three categories. “Unbelievable. That shows how important he is to us,” praised Ojeda. Sikma himself was happy about his quick return: “We recently had a bad phase, so you want to help the team. It was a good test against a good team. I am very happy with our reaction.”

Now a win against Red Star in the Euroleague on Tuesday is also planned. The Serbs are behind the Berliners with only two successes, too little for their claims. Belgrade hired a new coach last week in experienced grinder Dusko Ivanovic, who won his first game straight away. “I’m expecting a difficult game because they have a new coach and they looked better straight away,” says Ojeda, “they will be focused and motivated, they have to win games.” (dpa)