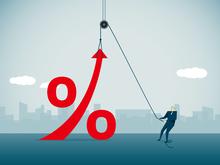 For years, life insurance customers had longed for the turnaround in interest rates. But now that interest rates are actually rising, some policyholders could be disappointed. Instead of rising surpluses, the bottom line could perhaps even be a little less, warns Axel Kleinlein, actuary and ex-head of the Federation of Insured Persons (BdV).

Because the bonds that insurers bought when interest rates were down are losing value now that new, higher-yielding alternatives are coming onto the market. However, if the current market value of the capital investments is below the book value of the investments in the balance sheet, the insurers have so-called hidden burdens. “The contracts are becoming less profitable,” warns Kleinlein. For a long time, policyholders were on the bright side in this respect: At the end of the contract, they received money from hidden reserves because old, higher-interest investments by insurers had increased in value during the low-interest phase.

There is a way out

“The rise in interest rates is leading to a reduction in the valuation reserves of fixed-income securities held by insurance companies,” confirms Jörg Asmussen, General Manager of the German Insurance Association (GDV). However, the companies could hold their bonds until the maturity date and would then be paid the nominal value by the bond issuer. Until then, they received the interest payments. That’s true, but this strategy doesn’t work without limits. “In the case of some investments, such as 100-year government bonds, it will be difficult for insurers to convince the auditors that they will actually remain on the books until the end of the term,” Herbert Schneidemann, head of the German Association of Actuaries, told the “Handelsblatt”.

The turnaround in interest rates is good for customers of life insurers.

However, the problem is alleviated by a relief elsewhere. Since 2011, insurers have had to build up what is known as an additional interest reserve in order to secure the sometimes high guarantees provided by customers even when interest rates are low. “At the current interest rate level, it is fully financed and will fall for the first time in 2022,” Asmussen told the Tagesspiegel.

The money would then be free for other uses – such as higher surpluses for the benefit of customers. However, consumer advocates do not anticipate a short-term increase in surplus sharing. “Insurers cannot switch that quickly,” warns Kleinlein. Insurers in particular, who have many long-dated, low-interest securities in their portfolios, are trapped.

However, there is one good thing about rising interest rates: companies need less equity for risk provisioning. After one presented on Tuesday Analysis of solvency ratios According to estimates by the BdV and the expert Carsten Zielke, out of 78 life insurers, 13 are still counted, but compared to the previous year, when 23 companies were counted, the situation has improved significantly.

“The turnaround in interest rates is good for the customers of life insurers,” emphasizes Asmussen. Companies would need less capital as risk provisions, so solvency ratios would rise. “Higher interest rates also lead to rising interest on capital investments. Customers will benefit from this in the medium term through a higher profit participation,” predicts the general manager.

Read Tagesspiegel-Plus articles on this topic

Tax tips for investors How to tax dividends and life insurance Up to 1260 euros pension subsidy What if the state put 5,000 euros in stocks for every baby? Income distribution in Germany When are you considered rich?

But because the interest rate rise for life insurance contracts is slower than for bank products such as time deposits, Kleinlein fears a wave of cancellations. Mainly because the high inflation increases the pressure to get as much out of the savings as possible. Consumers should calculate whether they should really terminate the contract or prefer to make it non-contributory. The “Hop or Top” arithmeticr of the BdV on the Internet.