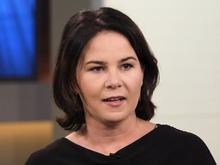 The talk show “Anne Will” is back from the summer break. But even the weeks of absence couldn’t prevent the old topics from becoming new ones. Again on Sunday the question was: “Battle tanks for Ukraine – why is the federal government hesitating?” The discussion has just been postponed, after artillery and rocket launchers and Gepard, battle tanks like Marder and Leopard are now supposed to support the Ukrainian counter-offensive.

Moderator Anne Will discussed why this is a difficult question with Foreign Minister Annalena Baerbock (Bündnis 90/Die Grünen). The Green politicians weren’t on the studio floor (why not?) so Will cross-examined them for 15 minutes at the start of the show.

Fast speaker Baerbock wanted to make a clear statement, but two arguments became clear in the cloud of words: there is concern about a German going it alone, there are said to be problems in the Ukraine for the operation and repair of tanks from Germany.

The foreign minister did not seem to be comfortable with this position, as it were in the closing remarks she indicated that a coalition of the 13 Leo states is being worked on so that the tanks can finally reach Ukraine.

From the intro it went into the round, in which Michael Müller (SPD) had a difficult time. His interlocutors, Roderich Kiesewetter (CDU), the former NATO commander-in-chief Egon Ramms and the American-Polish historian Anne Applebaum brought argument after argument as to why the German government’s hesitation was not understood or even accepted by the Ukrainians, the Baltics and the Americans.

Applebaum in particular was very clear: Germany had built up Putin, Putinism. The Kremlin ruler can only be deterred with tanks, “Putin only responds to power”. As a sort of compromise solution, Ramms suggested that Germany should deliver the Leopard 1 and Marder, if not the Leopard 2.

Putin only responds to power.

For Roderich Kiesewetter, the concerns of the federal government are an eminent mistake, Germany is seen elsewhere on a special and thus on the wrong track. The US would supply 30 times more weapons.

Müller provided other numbers, the show almost slipped into a statistics battle. Anne Will knew how to prevent this, as she managed in the 60 minutes to deliver, if not completely new insights, but to show the facets of this complex topic. The tank question is more than black and white, the implications are too diverse. The round at “Anne Will” provided the reason.

Yes, Michael Müller had a difficult time. But the politician has shown that he has grown from the role of governing mayor to the role of foreign policy officer. He articulated what not a few Germans fear: How aggressively does Vladimir Putin react when he feels pushed to the brink of defeat with German tank help? If the extended support leads to further escalation? “It’s a tightrope walk,” he warned against overly simple solution formulas.

You can read more about the Ukraine war on Tagesspiegel Plus:

The 60 minutes were a show of serious faces. They illustrated what German politics is right now: a struggle to find the right path for support that will at least put Ukraine in an acceptable negotiating position – and Germany in an acceptable military leadership role.