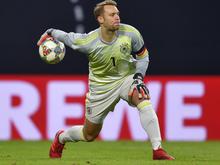 The Cologne retail giant Rewe is ending its cooperation with the German Football Association with immediate effect because of FIFA’s decision on the “One Love” armband.

The company wants to clearly distance itself from the attitude of the world association Fifa and the statements made by President Gianni Infantino and will therefore waive its advertising rights from the existing contract with the DFB, especially in the context of the World Cup, said CEO Lionel Souque on Tuesday.

“We stand for diversity – and football is diversity, too,” said Souque. “For me as the CEO of a diverse company and as a football fan, Fifa’s scandalous attitude is absolutely unacceptable.” captain’s armband. The DFB and the other European associations involved decided to do this because of threatened Fifa sanctions.

Rewe had already informed the DFB in October that it would not continue the long-term partnership agreement – at that time there was still no connection to the World Cup. According to the current decisions by Fifa, the group is now suspending the contract with the DFB and waiving advertising rights, it said in Cologne. The company has already informed the DFB of this.

More on the subject:

The collector’s album currently available from REWE will be given away free of charge with immediate effect, with the company bearing the costs, the retail giant announced. Rewe will donate all of the previous earnings from the album once the promotion ends.

Despite the move, Rewe expressly wishes the German national team and all players every success for the World Cup. “We stand by your side and root for you!” said Souque. (dpa)