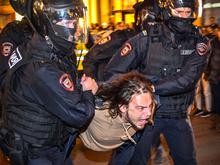 Following Kremlin chief Vladimir Putin’s order for partial mobilization for the war in Ukraine, the leadership in Moscow complained of “hysteria” in the country.

At the same time, it excluded reservists with certain professions from forced recruitment. For example, IT specialists, experts for securing the financial system or employees of the mass media who belong to the “system-preserving” professions would not be drafted, the Defense Ministry in Moscow announced on Friday.

Thousands of men fled the country as reservists were called up for the war in Ukraine. The exodus is also considered a danger for the Russian economy. After Putin ordered the invasion of Ukraine in February, tens of thousands of people left the country.

Kremlin spokesman Dmitry Peskov called for adequate information. “It’s kind of understandable that for the first few hours after the announcement and even on the first day, there was a hysterical, extremely emotional reaction because there was in fact insufficient information,” Peskow said. In the meantime, however, there are also hotlines to clarify questions over the phone.

The head of the defense committee in the Russian parliament, Andrei Kartapolow, explained with regard to the flight that the law on mobilization does ban reservists from leaving the country. However, because it is a partial mobilization, the law will not be applied. Travel within Russia and abroad is therefore allowed. But he recommended reservists who are unsure to go to the draft station themselves to clarify what is and isn’t allowed. (dpa)