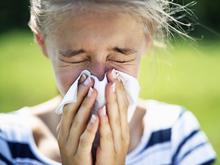 According to the Robert Koch Institute (RKI), the trend in the reported corona cases in Germany will initially continue to decrease. According to data from the online survey “GrippeWeb”, the number of acute respiratory diseases in general has increased significantly compared to the previous week, as stated in the RKI weekly report on the development of the corona pandemic on Thursday evening. In the week to November 20, it was around seven million, even above the range of pre-pandemic years.

In the coming weeks, an increasing number of respiratory diseases is to be expected due to seasonal factors. “In particular, the positive rate and the number of illnesses caused by influenza show a clearly increasing trend. In addition, RSV infections lead to illnesses and hospital admissions, especially in small children.”

This is also reflected in the recording of severe acute respiratory infections (sarees) in newly admitted patients: Due to the unusually strong RSV circulation, there are currently significantly more cases of sarees in children up to 4 years of age than in the pre-pandemic years and in the previous year, as the RKI said. The sari values ​​are also at a very high level in the following age groups up to 14 years.

There was initially no increase in reports of corona evidence: nationwide, the seven-day incidence last week fell again by 17 percent compared to the week before, according to the RKI weekly report.

Most of the results in it relate to the past week. The highest incidences were therefore people over 90 years of age, for whom the smallest decrease in incidence values ​​was noted since the week before.

Distribution of BQ.1.1 continues to increase

The number of hospital treatments for Covid-19 also continued to fall, according to the report. Accordingly, fewer seriously ill people were treated with the virus in the intensive care units in the country. In addition, the RKI continues to report a decrease in outbreaks in old people’s and nursing homes. The decline in the number of cases has been apparent since mid-October, it said.

The distribution of the relatively new omicron subline BQ.1.1 in Germany continued to increase. The proportion in a sample was almost nine percent the week before last (previous week: eight), the report said. “BQ.1.1 is also one of the most frequently detected sublines in other countries, although no increase in the burden of the disease has been observed to date with the spread of BQ.1.1 and BF.7.”

According to the Berlin virologist Christian Drosten, the course of the winter depends, among other things, on which of these two corona variants prevails: If the omicron derivative BQ.1.1 becomes dominant, “the winter could be difficult again,” said Drosten. But he also sees the possibility of a gentle winter wave.

More on the subject:

Omicron, Long Covid, Psyche How children cope with corona infections “Be careful this winter” What can life with the virus look like? Immunologist on the Corona winter “The new variants don’t scare me so far”

According to initial findings, BQ.1.1 can evade the immune response of people who are vaccinated and/or recovered relatively well. In addition, new therapies will probably be necessary for the treatment of the corona subvariant: All currently approved antibody therapies did not work on her, the German Primate Center announced on Wednesday.

Especially in regions where BQ.1.1 is already widespread, doctors should not rely solely on antibody therapies when treating infected high-risk patients, but should also consider other drugs such as Paxlovid, said study leader Markus Hoffmann. In addition, new antibody therapies would have to be developed. (dpa)