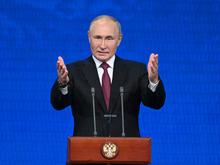 Tuesday was a day that, in retrospect, could become one of the most crucial in Russia’s war against Ukraine. All of the areas or parts of Ukraine still occupied by Russia (Luhansk, Donetsk, Cherson and Zaporizhia) have announced that they will hold votes on joining Russia as early as Friday.

The result is actually already clear: They will want to join Russia, and Russia’s parliament will grant it in a timely manner. At least that’s the most likely scenario right now.

A speech by the Russian President was expected for Tuesday evening at 8 p.m. Defense Minister Shoigu was also scheduled to speak. By late evening, however, the speeches had still not taken place until reports came that the speech had been postponed to Wednesday. The reasons are unclear.

Observers assume that Putin could also announce or hint at a general mobilization in the speech. For that to happen, however, Russia would have to officially declare war on Ukraine, or declare itself at war. The annexations of the occupied territories could provide the pretext for a declaration of war. Putin recently stated that the country is far from using all of its military forces in Ukraine.

Kyiv reacted rather calmly to the announcements, calling them another indication of Russia’s desperation. In fact, Ukrainian troops are still advancing both to the east and to the south. A complete collapse of the Russian front is at least no longer impossible. Would that be delayed or prevented if the occupied territories join Russia? That will be the key question after what could be a pivotal day.

The most important news of the day at a glance:

Despite all power Is Putin’s throne faltering? That’s what experts say From Potsdam as a soldier in the Ukraine war “The artillery fired every day” Stalinism light in Russia? Repression of journalists is increasing