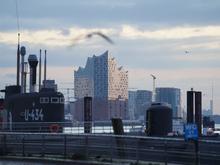 Shortly before the start of a concert in the Elbphilharmonie, climate activists of the “last generation” glued themselves to a conductor’s podium on Wednesday evening.

In a video that the group shared on Twitter, a woman and a man, each wearing a safety vest, were seen standing at the lectern on stage and speaking to the audience. The activists called for resistance to what they saw as the government’s indecisive climate policy.

A police spokesman said when asked by the German Press Agency that two activists had glued themselves to a railing in the Great Hall with superglue on Wednesday evening shortly after 8 p.m. – a few moments before the concert by the Saxon Staatskapelle began. The two were released from the railing after a short time and taken into custody.

“Just as there is only one Beethoven violin concerto, we only have this one planet whose boundaries we so disregard that climate-related disasters are becoming more frequent and deadly,” says an activist in a “Last Generation” video posted on Twitter. And: “There will be no more Elbphilharmonie to enjoy Beethoven when Hamburg is under water.” (dpa)