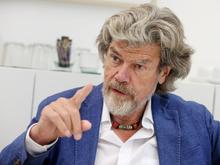 Extreme mountaineer Reinhold Messner considers preaching renunciation and prohibitions to be counterproductive in the fight against environmental destruction and climate change. “If you ban everything, you achieve nothing,” said the 78-year-old of the “Augsburger Allgemeine” (Tuesday edition).

“We have all become richer by wasting resources,” said the South Tyrolean. “Now we have to take countermeasures, but without fundamentalism,” he emphasized.

“Only with bans will the people who waste resources uncontrollably not be swayed,” he said. “You can’t go to America on foot,” stressed Messner. “I also have to fly if I want to go to Australia.”

The conservationist, who sat in the European Parliament for five years until 2004 as a non-partisan member of parliament for the Greens, explains: “Only the voluntariness works, then you can put positive values ​​in the renunciation.”

“My path was the path of renunciation and it was successful,” the extreme mountaineer continued. “Like the lack of oxygen on Everest, which opened up new avenues for me.”

He therefore campaigned for the preservation of traditional alpinism and untouched nature: “The wilderness has been pushed back more and more in recent years. We can no longer allow that.” (dpa)