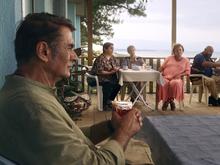 The children announce the terrible news as if it were cause for celebration: “Dead, dead, dead. He’s dead,” cheers the little group as they run across the beach to the Wet Sand café terrace. The men sitting there do not understand at first who is meant. Then it becomes clear: It’s about Eliko, who was often a guest here. One of the boys shows how he ended his life between his grinning friends: the old man hanged himself.

The fact that the children are so disrespectful has to do with the outsider position that Eliko had in the small town on the Georgian Black Sea coast. This status is also reflected in the terrace discussion of the village community that took place a little later.

The tone is derogatory, nobody wants to organize the burial of the dead man. Only Amnon (Gia Agumava), the owner of the café, speaks kindly of him. “He was my loyal guest,” he says, announcing that he will take care of the funeral service, with or without help. His counterpart Dato (Zaal Goguadze) sticks to his negative attitude.

Amnon against Dato – from here on, that is the constellation in Elene Naveriani’s drama “Wet Sand”, which repeatedly focuses on the approaching waves of the Black Sea in long, calm shots. It is an archaic world that only seems idyllic at first glance.

The fact that the film is set in the present only becomes clear because the TV occasionally mentions a pandemic or environmental catastrophes. The only person with a smartphone is Amnon’s co-worker Fleshka (Megi Kobaladze), a loner whose jacket says “Follow Your Fucking Dreams” in huge letters. Her dream is to leave the village.

But first someone new comes to town: Eliko’s granddaughter Moe (Bebe Sesitashvili). When Amnon picks her up at the bus stop, she looks like a rock star with her short blonde hair, leather jacket and sunglasses. The young woman from Tbilisi, who smokes constantly, will help him with the funeral – and soon find out that her grandfather was much more to Amnon than just a loyal guest.

Who wants to learn more about queer topics The Tagesspiegel newsletter Queerspiegel appears twice a month. Register here for free.

And so Moe, Fleshka and Amnon finally form an alliance of others, joined by a lonely fisherman. What they have in common is that they have to live with the rejection of mainstream society. “You’re not a family, you’re the plague,” Dato throws at Moe at the funeral feast.

Elene Naveriani (also responsible for the screenplay together with her older brother Sandro) tells a powerful story about the hidden suffering, resilience and cross-generational solidarity of people whose desires and dreams lie outside of traditional guidelines.

Particularly moving is the performance of Amnon actor Gia Agumava, a Latin professor who is making his screen debut here. His gentle, dignified presence radiates throughout the film and gives it a laconic warmth that is sometimes reminiscent of early Aki Kaurismäki works.

After Levan Akin’s When We Danced (2019), Wet Sand is another touching queer film from the recently strong Georgian art house cinema. Although both works take a very close look at homophobia – especially the internalized one – they also open up a hopeful perspective. What Akin was the brilliant final dance of his main character, Naveriani is the vision of a new place where at least the younger outsiders can come together.

There is also a boy from the village, who always stays away from the children and never says a word. Maybe he has the chance to live his difference – and not to run along in the roaring crowd.