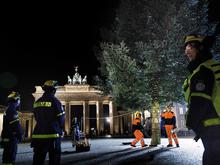 The traditional Christmas tree has been standing in front of the Brandenburg Gate in Berlin since Monday. The 15 meter high Nordmann fir with almost perfect pyramidal growth arrived on a low-loader from Thuringia and was erected by specialists on Pariser Platz with the help of a crane.

From Tuesday, the tree will be decorated with 15,000 LED lights and hundreds of Christmas balls, according to the organizer. From the 1st of Advent, it shines in all its splendor up to and including the festive period and, as in previous years, is likely to be the most photographed German Christmas tree.

However, something is different this year: the lamps on the tree are only on between 4 p.m. and 10 p.m. and not around the clock. According to the organizer, this is intended as a sign that electricity must be saved in the energy crisis.

More Christmas at Tagesspiegel Plus:

Advent calendar for everyone Count down the days until the party with gin, coffee or popcorn Preparations for the Advent season Berlin’s Christmas markets are making a big return this year

The Christmas tree at the Brandenburg Gate comes from Thuringia for the eighth time in a row since 2015. Last Saturday, the 20 to 30-year-old Nordmann fir was felled in the community of Lederhose, southeast of Jena. Until then, she was standing in front of a private house. (dpa)