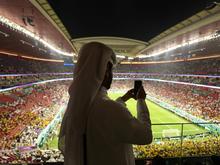 Two fans of Qatar and Ecuador who apparently clashed at the World Cup opening game have recorded a reconciliation video together.

A clip first circulated on Twitter on Sunday showing a fan in the South American jersey at Al-Bait Stadium during the hosts’ 2-0 defeat.

The fan stood and rubbed his fingertips together in the direction of Qatar fans. A gesture that is understood as counting money – a presumed allusion to the corruption allegations in connection with the award of the World Cup to Qatar.

A man in the traditional Qatari long white robe, called Thaub, didn’t like that at all a few rows further back. In English, he shouted angrily: “Shut up and sit down.” Other viewers advised him to relax.

A second video circulated a little later. The two opponents sit next to each other. The men shake hands.

In Arabic, the man in the thaub says: “We had a fight, but we made up and we apologized. I hope you spread this video as you spread our argument. In the end we are just fans.”

The Ecuadorian supporter also says in English: “Passion sometimes makes people angry. But we come together for the sport.” It is a nice World Cup until then, the people are very friendly. The original sources of the videos are unknown. (dpa)