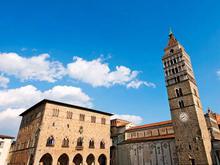 Pistoia is located in the middle of Tuscany, a gem of a city that is praised as the little sister of Florence, which is about 30 kilometers away, with its perfectly preserved center of medieval walls and Renaissance palazzi. For more than seven decades, Pistoia was consistently ruled from the left. Since the fall of fascism in 1944, only men from the KPI and then from its successor parties have been in the town hall. Only briefly did a socialist succeed to the communist throne in the 1940s. That’s how it was until 2017. That was when a right-wing voted for the first time – and not even a moderate one: Alessandro Tomasi has been active on the far right since his youth and is now a member of the “Fratelli d’Italia”, the catchment basin for fascism nostalgics and neo-fascists , who themselves in the party symbol, the green, white and red flame, confess to the black past and present. In a week they could nominate Italy’s first female prime minister, Giorgia Meloni. A slip of the voters in a red stronghold? Hardly likely. In June, the now 43-year-old mayor Alessandro Tomasi was re-elected, this time in a single ballot.

And Pistoia is not an isolated case. Little by little, Italy’s once bright red belt has turned green (Lega), blue (Forza Italia) and black in recent years. It went to the right. Nevertheless, Matteo Giusti insists: “Pistoia is not a real city.” The 32-year-old city councilor, a member of the social-democratic PD, has just had a great success himself. The political newcomer, albeit one with extensive experience in voluntary and social work, received the most personal votes right away and was thus allowed to chair the constituent session of the city parliament. The mayor, says Giusti, has managed over the past five years to no longer be perceived as a right-wing man, but as “bravo ragazzo”, as the good boy next door. It would never have worked without the support of citizen lists “which used to be quietly centre-left”. Why this? Five years ago, says Giusti, the turmoil in the left camp in Rome also had a local impact – in 2016 Matteo Renzi, himself a Tuscan and one of the most unpopular leaders of the party, had to become prime minister after the clear failure of his constitutional reform and the following year as PD chairman step back. This time, according to Giusti, many Pistoiesi said to each other: “Well, Tomasi wasn’t that bad as mayor.” So that normalization, the new eligibility of the right also in Italy? “Sure, on the right he is unchanged. He had the streets and parks cleaned up. But in social policy you can see where he belongs. Nothing happens there.”

Mayor Tomasi himself does not want to talk to a Berlin newspaper about the reasons for his success. His spokesman can only elicit this much: In the municipalities, “the person counts more than the party”. And in his case, as Tomasi’s CV reads, the image of the good boy is almost perfect: born in Pistoia and stayed there, only went to Florence to study politics, worked as a craftsman, married, two sons. You can’t even blame him for gender politics: His city government consists of exactly four women and four men.

The extent to which Italy is now looking at the person rather than the party behind it is probably also the result of an increasingly authoritarian electoral system that has given the party leadership more and more control over the composition of the lists. The fact that the citizens can only say yes and no to the menu of the superiors increases the disenchantment with the parties, widens the gap between society and – institutional – politics. PD man Giusti himself is proof of the value of being close to the people and of the person: He says he got 80 percent of his votes in the more rural parts of the city where he lives and where his work in voluntary social services is known.

For the next election, he is therefore counting on the five or six younger colleagues from the left-green camp, who only knew the old animosities and camp fights from hearsay. And that Tomasi, the Fratelli d’Italia man, had nothing more to offer. Their program is silent on climate and poverty. But answers are urgently needed: “The next election will not be won with clean parks and smooth, asphalted roads, but here.”