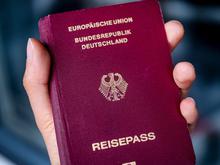 In the future, applicants for a new identity card or passport will be given the option of having the completed document sent directly to their home by post. The Federal Ministry of the Interior is planning to offer citizens the option of direct mail, said a spokeswoman at the request of the German Press Agency.

To date, applicants for a new ID document have usually had to go to their municipal office twice – to apply for it and then to pick it up. She did not name a point in time when this could be possible.

It is a complex project that requires many internal changes within Bundesdruckerei and also has a significant impact on the usual practice in the passport and ID authorities as well as immigration authorities. The ministry spokeswoman explained that the necessary technical and legal changes are being developed.

The Association of Cities in North Rhine-Westphalia has been demanding for some time that the Bundesdruckerei send identity documents directly to citizens. That would relieve citizens and administration alike, the municipal association of the most populous federal state had declared six months ago.

After two Corona years with restrictions, the demand for passports was very high this spring. In many places it was difficult to get an appointment with the authorities in a timely manner for a new identity document that was needed. At the time, the Federal Ministry of the Interior stated that the Federal Printing Office was examining sending new ID documents directly to citizens. (dpa)