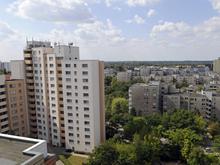 Almost 6,000 people live in the Rollbergesiedlung – i.e. the one in Waidmannslust between Zabel-Krüger-Damm and Schluchseestraße, not the one in Neukölln.

The settlement is characterized by high-rise buildings that were built in the 1960s to 1980s. With an average age of 38.8 years, this is a particularly young neighborhood in which the Quartiersmanagement (QM) Titiseestraße has been doing important work since 2021. Child poverty is a topic here again and again; the Rollbergesiedlung is inhabited by rather low-income people.

Urban development and more topics from Berlin’s districts in our free district newsletters at www.tagesspiegel.de/bezirke

All the more sensible, that social area-oriented planning takes place in the settlement from the district side. In addition to the QM, this also includes a new family center and a daycare center, the so-called “Face Campus”, which is scheduled to be completed in spring 2026 (we reported).

In addition, there is now a larger district center that the Rollbergesiedlung is to receive in the summer of 2023 at Zabel-Krüger-Damm 52. The state-owned housing association Gewobag is making the new premises available. Before the move, conversion and renovation work is still necessary.

As reported by the district office, the Senate Department for Urban Development, Building and Housing made 265,000 euros available from the building fund of QM Titiseestraße (urban development support program for social cohesion) at short notice. The Unionshilfswerk is responsible for the Rollberge district center.

This is one of many topics that Lisa Erzsa Weil reports on in her current district newsletter from Reinickendorf. The newsletter is published every Wednesday. you can him subscribe here for free. And Lisa Erza Weil has also written down this news for you: