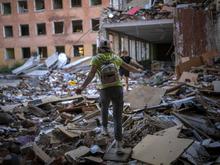 On September 1st the school year in Ukraine started again. That alone is unusual given the chaos that bombs and soldiers are leaving behind in the country.

For the schools in the Russian-occupied areas, however, the situation is particularly challenging and sometimes life-threatening for the Ukrainian teachers. War is not only waged here at the front, but also in the classrooms: the curriculum as a battlefield.

From the very beginning, Russia charged the illegal attack on Ukraine with ideology – as an “act of liberation” of the Ukrainian brother people, as “denazification”. This same propaganda is now supposed to find its way into the heads of Ukrainian school children by forcibly replacing the Ukrainian curriculum wherever possible.

The Ukrainian teacher Halyna reports what that looks like the British newspaper The Guardian. The fact that Halyna only dares to speak about her experiences under a false name and without naming her original place of residence shows the explosive nature of the topic.

She remembers the speech given by the longtime high school principal in her occupied city. He said: “Ukraine has let us down and isn’t coming back, and now the Russians are making us offers. If we don’t accept them, they will send new people from Russia to run the school and have no connection with it. It’s better if we stay here and try to take care of the school.”

But collaborating with the people who brought all the horror to their homeland was unimaginable to Halyna. “About a third of the teachers agreed to the proposal, but it was clear to me that there was no way I could work for the Russians,” she is quoted as saying and quit her job shortly afterwards.

War in Ukraine: “I had tears running down my face”

When the Russian occupiers announce that they will burn all Ukrainian textbooks, Halyna returns to her long-time workplace to save at least a few things. “Imagine that I worked in this school for more than 25 years and walked out alone with a potted plant and a bag of poems. I had tears running down my face,” she describes the moment.

Because she does not want to teach according to the Russian curriculum, Halyna is denounced as a “traitor” a short time later and ends up on the watch list of the Russian secret service FSB. All she can do is escape.

Her example is representative of the situation of many Ukrainian teachers in the occupied territories. In the conquered city of Cherson in the south of the country, the authorities deployed by Russia began preparations for the new school year at the beginning of August.

Russian propaganda in schools in the occupied territories

Teachers were specifically visited in their homes, threatened and forced to cooperate. At the time, the military administration in Cherson announced via its own telegram channel that it would import Russian literature and textbooks for the classroom.

The Russian newspaper Novaya Gazeta spoke in July to the Russian history teacher from the Perm region in the Urals, who volunteered to be transferred to Zaporizhia and has fully internalized the Russian narrative of Nazis in Ukraine. “I have a personal dislike for Ukraine. Not for the people, but for the state, which for the last 30 years has brainwashed its citizens and taught them to hate Russians (…). We can’t destroy all Ukrainian Nazis, that’s unrealistic, so we have to solve the problem with other methods,” he said – and may have described relatively precisely what the lessons will look like under the Russian occupation.

Read more about the war in Ukraine on Tagesspiegel-Plus

Meanwhile, some teachers, like Halyna, are trying to offer Ukrainian parents a way out of Russian indoctrination through online after-school classes. However, many of them are increasingly worried that they could be caught by the Russian authorities, she reports. The FSB is said to have already initiated investigations into the Ukrainian online lessons and searched the homes of individual teachers.

Halyna describes the growing division between the teaching staff as just as dramatic; between those who do not want to teach under Russian occupation and those who comply – be it out of conviction or pragmatism. All she has left is hope for the Ukrainian army. “I wait every day for her to liberate the city. And I hope it happens soon,” she says. (tsp)