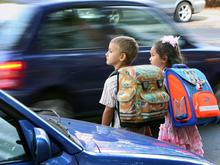 There are few issues in Berlin where the fronts are so hardened: When it comes to regulating or restricting car traffic in order to create more safety for cyclists and pedestrians, car owners get heated very quickly. On the other hand, people who mainly use their bicycles or their legs to get around get into an argumentative mood when discussing the extension of the city freeway or the bureaucratic hurdles associated with speed limits on the streets.

Julia Schuppan and Nikola Richter try to get both parties on the same boat when it comes to the safety of children on the road. Like many other areas in Berlin, your neighborhood in Alt-Treptow around the school on Bouchéstraße has a dangerous way to school: with problems such as through traffic, blocked intersections, second-row parking, a lack of bike lanes and parent taxis. Problems that are particularly evident in the morning hours in front of the school building: numerous working people use the streets in the area as shortcuts to avoid the traffic jams on the main streets. The regular buses are also stuck there, commuting schoolchildren either have to take a bus earlier or are too late.

“A safe way to school is possible”

The result is a high utilization of through traffic, which again and again leads to dangerous situations with children. “Cars are getting bigger, but children aren’t,” says Julia Schuppan. Together with Nikola Richter, she therefore founded the parents’ initiative “A safer way to school is possible” around three years ago. With campaigns such as road closures, traffic counts, mobility campaign days and an information flyer for parents and children, they draw attention to the lack of road safety.

But changing deadlocked structures is not easy. Berlin does not have an overarching plan of measures for road safety in front of schools, so far each Berlin district office has made its own decisions – and then also for each school individually. “It takes a lot of time and consumes an incredible amount of resources, but there are often not enough staff,” says Nikola Richter.

A working group on safety on the way to school from the Treptow-Köpenick district office was until recently based solely at the school office, but the urban development and roads department is now also involved. The latter is needed to implement concrete measures such as neighborhood blocks – the first in the district is planned for the Kungerkiez, where the school is located. “Together with the district office, the school management and the parents, we have already achieved a lot,” says Julia Schuppan. Among other things, two dialogue displays were set up in the street, which show the speed of the cars. The parking space in front of the school was also converted into bicycle parking spaces.

Commitment in the neighborhood in Berlin Where politics is sleepy, initiatives are often all the more alert Accident-free to school in Berlin So that no child gets under the wheels anymore Avoid chaos in front of schools Berlin police are targeting parents’ taxis

But there is still room for improvement. “I wish that our good work, which we started together with the school and the district office, will now boldly continue and that we will soon be able to talk about school streets – i.e. temporarily blocking the street in front of the school in the morning and in the afternoon,” says Julia Schuppan.

On Thursday, September 22, the International Car-Free Day, parents, students and the school are therefore organizing another joint campaign. In front of the Bouché school, they set up a temporary school street to draw attention to the need for safe routes. From 7:15 a.m. to 8:15 a.m. there will be an open mic, a school zone idea board and a survey by 3rd graders – and then everyone involved can do their best at a bicycle bell concert.

This is an excerpt from the newsletter for Treptow-Köpenick. Like all twelve district newsletters, you can subscribe here for free.