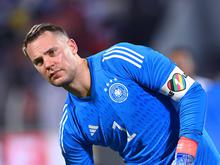 After all, the ball is still round at this World Cup. And it rolls, even if at least many football fans in Germany don’t want to see it. Neither did the (mainly male) viewers in Qatar.

The fact that the hosts left the stadium in droves after just 60 minutes of play for their team’s World Cup opening game is another sign of failure for a tournament that has reached an emotional end shortly after the start. And on Monday already experienced the next embarrassing low point.

Surprisingly, Europe’s football associations announced that their captains would not wear a “One Love” armband after all. This was supposed to be a sign of equality and freedom of expression, but only very much based on the rainbow flag and thus as a visible protest rather lukewarm anyway.

For Fifa, football is just marketing

But even that was too hot for Fifa, which has obviously sold itself entirely to host Qatar. The world football association announced that all captains who wear such a bandage will be punished with a yellow card. Players were threatened with bans during a FIFA tournament for standing up for human rights, which FIFA claims for itself in image videos. With this, the World Football Association showed what it only considers football to be: as a pure marketing tool.

First the beer ban and thus the breach of self-concluded contracts shortly before kick-off at the behest of Qatar. Then came the embarrassing speech by Fifa President Infantino, who in all seriousness compared the agonizing deaths of Qatari guest workers during stadium construction with the teasing he had experienced himself at school.

Now the sanctioning of a small symbol of indivisible human rights. Actually, the only thing missing is the instruction to play with a square ball in the future. Simply because one believes that one can dispose of everything and of everyone with money.

But that’s not sad enough: The threat of sanctions caused the allegedly brave to buckle – including the German Football Association. Now the German national team runs on Wednesday without the controversial armband and without captain Manuel Neuer without a backbone. No bandage for human rights – that too is of course a visible sign. A fatal one.

Yes, we’ve known that for a long time: This tournament is a crazy drawing board event in the desert winter. Plagued by corruption, awarded by the world football association Fifa, which has long since decoupled itself from football. Organized in a rich dictatorship that plays by its own rules, but certainly not by the charter of human rights.

The most recent statement by the Dutch Football Association is symptomatic of the entire World Cup: “We stand by the ‘One Love’ message and will continue to spread it, but our top priority is to win games.” For a self-evident message, one Risking a game suspension – European football doesn’t even have that little lack of courage. Only with free courage one would have played the visible advocacy for human rights.

Many teams from Iran are currently showing how courageous athletes can be – sent to international tournaments by a dictatorship that is massacring its own people because women want to wear their hair freely, because people want to express their opinions freely.

Interview with Green Party leader Ricarda Lang “No one should be silent in Qatar” “Contemporary Form of Slavery” Qatar, the kafala system – and the lives of migrant workers The German team trains here For secret training sessions, only Fort Knox would be better

Iran’s female athletes often let their hair down, teams don’t sing along with the national anthem or celebrate titles in a demonstrative way to express their grief over the innocent dead in their homeland. The Iranian team’s first game on Monday afternoon at the World Cup in Qatar will give a first indication of how much courage the national team can muster.

What is important here is that the athletes from dictatorships risk their freedom and even their lives even for small visible signs. The German and European footballers don’t even risk very little in Qatar, although they are threatened with nothing more than a symbolic game penalty. That should be just fine for Fifa, which was run after the dictatorship of money – because they now have almost nothing in common with football. Other than organizing an already disastrous World Cup.