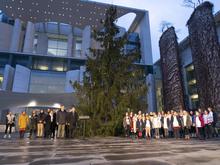 Once upon a time, out in the Black Forest, there was a beautiful silver fir, the most beautiful far and wide in the seven mountains of Freudenstadt and Bad Rippoldsau, slender, bolt upright and needled as densely as a fir can be.

A great future was predicted for her: her life was not to end in the mean sawmill one day, but far, far away at Christmas: as adornment of the Court of Honor in the Berlin Chancellery, densely occupied with shining candles, Olaf Scholz and his family for joy and edification. Even her sister, who was no less beautiful, was chosen as a replacement, just in case.

So much for the little fairy tale, which unfortunately turns towards the sawmill at the end. Because, as can be heard in the Freudenstadt town hall: the chancellery no longer wanted the traditional donation from the Association of Forest Owners (ADGW), which previously came from a different federal state every year.

If any tree at all, it was said, then at best from the region and of course PEFC-certified – that’s a kind of organic seal for trees, with which our Black Forest beauty couldn’t shine.

You cut down a tree and then decorate its corpse with candles?

“Somehow we can understand that in times of scarce resources it is better to choose a fir tree from the surrounding area,” says an employee in the Freudenstadt town hall: “The long transport also costs a lot of energy. Nevertheless, we were also a little sad.” Olaf, not the Chancellor, but the snowman from Disney’s seasonal classic “Frozen”: “You cut down a tree and then you decorate his corpse with candles?”

“The long journey costs a lot of energy. Nevertheless, we were also a little sad.”

Now the forest owners’ association, as a powerful lobby, is also diplomatically trained and in this respect was willing to accommodate at least one of the Olafs and to search for a regionally designated alternative. It wasn’t easy, because silver firs of Kanzler format are practically impossible to find in the vastness of the Brandenburg pinewood plantations. The search finally led to Neuzelle in the Oder-Spree district, to the forestry operations of the Neuzelle Foundation.

Their employees have been managing their own forestry operation with 9,000 hectares of forest since 2016. There, too, there are no suitable firs, but as the deputy manager Robert Hörnig reports: “We have selected two beautiful spruces, whereby we only need the second if the first is damaged during felling or transport.”

O spruce tree – well, times are such that traditions sometimes have to take a backseat. After all, the Neuzell trees apparently meet all the requirements for sustainability and beauty and are therefore tolerated by the highest authorities. On Thursday afternoon, the construction was completed in front of the cameras of the world press. After all, the fairy tale knows that snowman Olaf also made a U-turn and in the end found the corpse in full regalia really great.

The tree in the Bundestag is not a tree at all

By the way: The Bundestag also has a Christmas tree donated every year – this time it is to be set up next Tuesday, of course, sustainably and without any discord. However, the restriction is in the small print of the press release: It does not need a seal because it is not a tree. But a replica inspired only by the traditional tree, made from honeycomb panels and 99 percent recycled cardboard.

More than just mulled wine in a paper cup Where Brandenburg’s most beautiful Christmas markets can be found Advent calendar for everyone Count down the days until the party with gin, coffee or popcorn gaps on the shelf Are toys becoming scarce at Christmas?

Pupils from the Blankensee elementary school in Brandenburg made it on behalf of the Association of German Nature Parks, so even the regional assignment is correct. And because of its rather unromantic but stable nature, it can be used again for years to come, until it eventually becomes boring.

We see: In these complicated times, Christmas is also political. Olaf the snowman could not yet become this new tree model. He’s probably made of cardboard himself long ago.