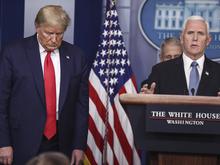 The US Department of Justice is reportedly wanting to question former Vice President Mike Pence in connection with the storming of the US Capitol. Pence’s team indicated that the 63-year-old was open to possible talks, the reported among others “New York Times” and the broadcaster CNN on Wednesday.

Pence recently stated that he was considering running for the White House executive chair – and was thus also prepared to compete against his former companion Donald Trump.

Trump supporters stormed the seat of parliament in Washington on January 6, 2021. Congress met there to formally confirm the election victory of Trump’s democratic challenger Joe Biden. The violent crowd wanted to prevent that.

Trump had called on Pence to blockade

At that time, Pence chaired the congress session in his role as Vice President – legally a purely ceremonial task. Trump had previously openly called on his deputy to block the procedure. Pence has also been close to Trump at key moments surrounding the attempt to overturn the election.

The 63-year-old described Trump’s actions on January 6, 2021 as “reckless”. However, he refused to answer questions from a parliamentary committee of inquiry into the incident.

Why can’t he leave it? Four attempts to explain Trump’s completely illogical candidacy A little peace, a little climate Biden and Xi have at least found two common denominators The “red wave” that didn’t come The overrated Republican potential in the midterms

The Justice Department has long been investigating the attack and those involved. However, it is still unclear whether the ministry could also prosecute the ex-president because of his role in it.

The House of Representatives committee of inquiry had presented a number of witnesses at several public hearings who had heavily incriminated Trump. Trump criticizes the investigation as a whole as politically motivated and has long complained that it was just an attempt by his opponents to prevent him from returning to the White House. (dpa)