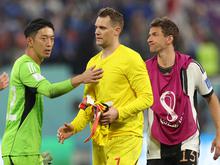 The players of the German national team reacted frustrated to the defeat at the start of the World Cup in Qatar.

“It’s a huge disappointment for us, we’re frustrated. It’s hard for me to understand just after the game how we gave it up,” said captain Manuel Neuer after the game on MagentaTV. “Now we have the trouble. We have to do better against Spain and show what potential we have.”

Germany’s goalscorer Ilkay Gündogan also expressed disappointment. “We made it too easy for Japan. Especially the second goal, I don’t know if an easier goal has ever been scored at a World Cup. That must not happen,” he told ARD. “We had incredible opportunities up front and didn’t score the second. The way the goals were scored shouldn’t happen to us.”

“I’m still a bit shocked at the moment,” said Thomas Müller. In general, his team played well over long stretches, only the effectiveness was not right at both ends. “It’s ridiculous that we’re here with a defeat. In the end, we clearly have to blame ourselves for the lack of efficiency,” Müller continued.

Müller is already looking at the Spain game on Sunday, in which the DFB team is already under enormous pressure: “We have to make sure that we shake it off and recover physically, we have no other choice.” The team have to approach the game in such a way that it almost has to win. “We actually wanted to take this pressure off with a win in the opening round,” said Müller.

More about the World Cup:

“Everyone just wants to get through this World Cup somehow” Berlin football bar shows tournament in Qatar – with a critical supporting program Musician Patrick Wagner on the armband dispute “Kimmich and Neuer should kiss. With tongue” A country celebrates itself The surprisingly different face of the World Cup

National coach Hansi Flick complained about his team’s lack of exploitation of chances. “This is brutally disappointing. We rightly took a 1-0 lead, that was more than deserved,” Flick told ARD. “We missed a lot of chances to score. You just have to say: Japan clearly beat us in terms of efficiency.”

The 57-year-old also criticized his team’s defensive behavior in crucial situations. “The individual mistakes that we made just can’t be allowed to happen,” he said. “We have to build up the players now. We won’t have a nice trip home because everyone has that in their heads now and everyone is angry that we didn’t win the game today.” (dpa)