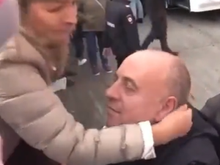 On Wednesday, Russia’s Defense Minister Sergei Shoigu announced the Kremlin’s plans for partial mobilization. 300,000 new reservists are to be drafted for the war in Ukraine. This led to protests and arrests in various Russian cities.

In the past two days, more and more planes with Russian men have landed at Istanbul Airport. There were long traffic jams at the borders with Finland and Georgia.

“Something like this doesn’t happen overnight” Why 300,000 soldiers won’t turn Putin around

Meanwhile, more and more videos of early recruitment scenes are making the rounds on social media. You can see desperation among the recruits, quarrels between those who support and oppose the war, and a harsh tone in dealing with the new soldiers.

In one of the videos, a guard yells at the men: “Why do you yell like women? Shut up!” And further: “That’s it. The games are over. You are soldiers now!” In addition, the reservists are informed that apparently no more than two weeks are planned for their training. Then it’s time to go to the front. The recordings cannot be checked independently.

In the city of Neryungri in the Russian republic of Yakutia, men say goodbye to their families and loved ones. Some of the women have tears in their eyes and are visibly shaken. A little later, the men board a white coach that takes them to their training camp.

In Dagestan, a republic in the North Caucasus, a woman is trying to convince men who are apparently unwilling to fight to go to war. She refers to her grandfather, who already fought for Russia. One of the men shouts angrily, “It’s (this war) all about politics.”

Other recruits, on the other hand, seem euphoric about going to war.

Following Kremlin chief Vladimir Putin’s order for partial mobilization for the war in Ukraine, the leadership in Moscow complained of “hysteria” in the country on Friday.

At the same time, it excluded reservists with certain professions from forced recruitment. For example, IT specialists, experts for securing the financial system or employees of the mass media who belong to the “system-preserving” professions would not be drafted, the Defense Ministry in Moscow announced on Friday.

Kremlin spokesman Dmitry Peskov called for adequate information. “It’s kind of understandable that for the first few hours after the announcement and even on the first day, there was a hysterical, extremely emotional reaction because there was in fact insufficient information,” Peskow said. In the meantime, however, there are also hotlines to clarify questions over the phone.

Chechnya’s ruler Ramzan Kadyrov, meanwhile, has called Russians who don’t want to take part in the war against Ukraine cowards. “You know, you’re nothing more than a coward, traitor and second-class person,” he said to conscientious objectors on his Telegram channel on Friday. Reasons for refusal, such as rejection of war, violence or Russia’s political leadership, are just excuses, said Kadyrov. Its troops have been fighting on the side of Russia since the beginning of the war. (tsp/dpa)