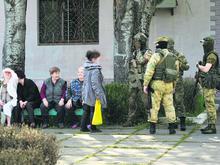 Russia responded to the successful lightning offensive by the Ukrainians in the east of the country with a kind of lightning annexation of the areas still occupied. From the end of the week, the administrations in Luhansk, Donetsk, Cherson and the occupied parts of the Zaporizhia region, which are supported by Moscow, want the remaining citizens to vote on joining Russia. It’s a repeat of the Crimean scenario.

The announcement and the rushed conduct of the referendums seem like an act of desperation, especially since those votes were only recently postponed indefinitely.

But Putin definitely doesn’t want to appear desperate. Instead, he wants to present strength – both internally and externally. His calculus – one can assume that the actions of the local administration are closely coordinated with Moscow – could be as follows: if the areas become quasi-Russian national territory after a pro-Russia vote, an attack on them could be seen as an attack against Russia itself will.

A pretext for an official declaration of war?

There are many possible answers: It could be an excuse for the Kremlin to officially declare war on Ukraine, which would, among other things, justify a general mobilization in Russia.

Putin could also threaten the West that an attack with Western weapons on the annexed areas would be counted as NATO entering the war. In the worst case, Russia could even respond with a nuclear strike on Ukraine, in line with its nuclear doctrine.

Corpses found in eastern Ukraine What is known about the crimes in Izyum The end of the occupation in Kharkiv “I’m on my feet, but really I’m dying” failures in Ukraine When the “bloodhound” turns against the master

However, experience with Crimea stands in the way of this escalation scenario. Ukraine is also attacking the peninsula, and the blows are painful for Russia. If Putin had wanted it, he could have escalated here.