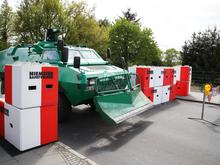 With a three-day large-scale exercise, police authorities and health organizations in Berlin want to prepare for terrorist attacks with biological weapons. A bomb attack, in which biological substances would also be used, has been simulated since Tuesday. As the Berlin police announced, it is about examining and adapting the operational concepts of the authorities to protect the population and to prosecute the perpetrators.

The exercise lasts until Thursday, everything is rehearsed, from the first alarm to the police and fire brigade, to working at the scene of the crime and treating the injured, to decontamination, evaluation of the substances in the laboratory and tracking down the perpetrators. Special police and fire brigade vehicles are also used for such scenarios.

However, the public does not get much from the simulated operations. The location of the exercise was not initially revealed. It is a non-public area – possibly in the north of Berlin, as indicated by the cooperation of the health authorities in Berlin-Mitte and Reinickendorf. A lot also happens in the respective operations centers. The police want to provide detailed information on Wednesday.

In addition to the Berlin police, the Federal Criminal Police Office (BKA) and the Federal Police are involved, as well as the fire brigade, the Robert Koch Institute (RKI), the Charité University Hospital, the Senate and the public health service. (dpa)