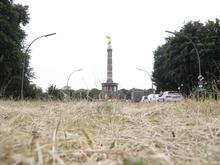 Grass hasn’t grown there for a long time: Berlin’s parks had already dried up in early summer, and heavy rains are now threatening in autumn. The driest summer since weather records began has shown Berlin that it is in the midst of climate change. Forest fires, low water levels and the dying of trees are already making permanent changes visible and tangible. And show that the city needs to rethink itself.

How can Berlin become more climate-proof? How can urban nature be preserved in a growing metropolis? And how can new districts be built and planned in a climate-friendly manner? On the eve of the next called “climate strike”, experts will discuss this on Thursday evening in the Urania in the Tagesspiegel series “City in Conversation – Berlin in Transition”.

Head of the rainwater agency in conversation

From 7:30 p.m., Darla Nickel, head of the Berlin Rainwater Agency, and Klaus Wichert from the environmental administration will report on the city’s efforts to become climate-resilient. Landscape architect Antje Backhaus and Eike Richter from the Chamber of Architects present examples of how Berlin can also plan in a more climate-friendly manner when building. And Oliver Schruoffeneger (Greens), environmental city councilor from Charlottenburg-Wilmersdorf, reports on the efforts of the level in the traffic and climate change in Berlin.

the Debate in the Urania (An der Urania 17; underground station Wittenbergplatz) will be moderated by Tagesspiegel author Robert Ide. The series “City in Conversation – Berlin in Transition” by the Tagesspiegel, Urania and the Chamber of Architects has been offering a forum for the city’s future debates since 2010. Admission is free. (tsp)