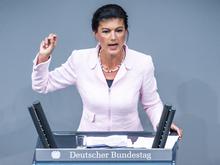 In the Left Party you have to be satisfied with small things these days. “There was neither chaos nor decay,” said parliamentary group leader Dietmar Bartsch after the more than three-hour meeting of the left-wing MPs. Corresponding prophecies did not come true.

Several MPs speak of a “quite controversial parliamentary group meeting”. Of course, it was not a “hippie chair group”, as Jan Korte, the parliamentary manager, later said. But there were “no injuries”.

After a speech by Sahra Wagenknecht in the Bundestag two weeks ago, the long-simmering dispute in the party had broken out openly. The controversial MP had accused the federal government of “starting an unprecedented economic war against our most important energy supplier”.

At the same time, she had called for an end to sanctions against Russia. Wagenknecht’s speech led to “considerable political upheavals, including resignations from the party,” wrote eight left-wing MPs in an application to the parliamentary group.

Speakers should represent “the majority opinion of the group”.

However, the Wagenknecht opponents do not have a majority in the 39-strong faction. In the body, the Wagenknecht camp has formed a strategic alliance with the reformers around parliamentary group leader Dietmar Bartsch for years. The controversial politician herself was not present in person at the meeting, but temporarily connected via video.

But there was no vote on the application by Wagenknecht opponents on Tuesday. The parliamentary group board had submitted its own motion, which was accepted with a large majority.

Also read at Tagesspiegel Plus:

At the same time, the decision reminds the members of parliament that they are obliged to attend the meetings of the Bundestag and the committees – this can also be understood as a reminder to Wagenknecht.

In the end, Wagenknecht’s critics were also satisfied with the result of the parliamentary group meeting. They withdrew their motion and voted unanimously in favor of the board’s draft. The decision is a “good basis,” said ex-party leader Bernd Riexinger. While the MPs were still talking to the cameras in the Reichstag building, Wagenknecht was already preparing for their next TV appearance, which was expected on Tuesday evening.