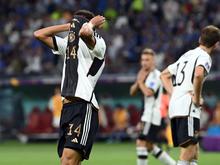 Hansi Flick has a soft spot for bold aphorisms and calendar wisdom. It’s always been like that for him.

At the 2014 World Cup, for example, when he was still helping national coach Joachim Löw as an assistant, Flick was even allowed to put up a banner with a special message in the neighborhood on the Atlantic Ocean. “A good beginning needs enthusiasm, a good ending needs discipline,” it read.

There is little objection to the sentence. Last but not least, the German footballers showed that at the 2014 World Cup in Brazil: They started the tournament with a good mood win against Portugal and ended it in the final against Argentina thanks to great discipline, especially on the defensive, by winning the fourth world title.

The national team found out painfully on Wednesday in Al-Rayyan that the sentence is also true on a small scale, especially the part with the discipline. In their World Cup opener against Japan, they led 1-0 against the underdogs from Asia with fifteen minutes remaining.

The national team has kept a clean sheet this year

But there was no good end, but a probably momentous 1:2 defeat. Because the team made too many mistakes. Once again, one must unfortunately add.

If you look at the first half of the game, in which the Germans were clearly superior, and if you add the excellent chances that Flick’s players almost negligently missed at the beginning of the second half, then the sudden turn in the game may seem strange.

However, if you look a little further, things look quite different.

All of this is no coincidence. In any case, the trend has not spoken for the German team recently.

The magic of the beginning is gone

What escalated against Japan on Wednesday has been indicated for a long time. The national team has won only three of ten games this year; she only kept clean sheets against Oman a week ago and against Israel in March.

In both cases, by the way, only with a lot of luck. The Omanis missed the empty goal in the closing stages, the Israelis missed a penalty.

The magic of the beginning, which the change from Joachim Löw to Hansi Flick to the position of national coach triggered, has evaporated for the time being. Flick undoubtedly did a lot of things right. He has a clear idea of ​​how he wants to play and the team follows him.

But Flick is now increasingly confronted with problems that already accompanied his predecessor Löw at the end of his term.

More about the national team

German players shut their mouths The protest oscillates between banal and trying, embarrassing and grotesque Reactions to the start of the World Cup “It’s ridiculous that we’re here with a defeat” The ultimate title test Can the current DFB starting eleven keep up with the world champions?

With a certain carelessness, for example, which is characteristic of this team and which shows both in front of the opponent’s goal and when defending your own. It was individual mistakes “that we paid for today,” said Flick after the defeat against the Japanese.

This was not the first time. The forces of perseverance within this team are apparently surprisingly large. In any case, in order to counteract this, it takes more than bold aphorisms and wisdom from the calendar.