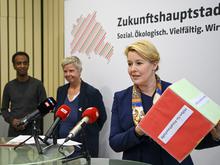 SPD, Greens and Left have agreed on further relief measures due to rising energy costs. Citizens, companies, social organizations and public properties should benefit from this.

“We will not be able to intercept everything in Berlin,” said the governing mayor Franziska Giffey (SPD) after a coalition committee on Monday. Nevertheless, one wants to create security in one of the “most difficult emergencies since the end of the Second World War”.

“No Berliner should lose their apartment because of the hardships that are to come this winter,” said the state chairman of the Greens, Philmon Ghirmai. Depending on a possible energy price brake at federal level, the coalition is also planning an energy cost subsidy and an electricity discount for people with low and middle incomes. Details are yet to be worked out, it said.

The coalition also wants to support clubs and social organizations. According to the coalition committee’s decision, the latter could, upon request, “receive flat-rate one-off payments of up to 300 euros per year for 2022 and 2023, for example per authorized place”. Clubs want to be given financial support “on proof of need and corresponding savings efforts”, “if there are no other financing options”.

For Berlin companies there should be an “immediate energy cost aid” based on the model of the Corona aid. A “loan program” is also planned to support companies that are experiencing financial difficulties. According to the decision, this could be implemented via the investment bank Berlin or via house banks.

Red-green-red decided last week to introduce a 29-euro ticket for the months of October, November and December. A price reduction of the social ticket, which is then only 1.50 euros cheaper, should come “as soon as possible”, said the state chairman of the left, Katina Schubert.

Due to the necessary coordination in the Berlin-Brandenburg transport association, a reduction this year is not very realistic, emphasized Governing Mayor Giffey. They are committed to a nationwide connection solution from January 2023 – which should then also be staggered as socially as possible.

Giffey pointed out that the concrete design of the Berlin relief package depends on the implementation of the federal aid measures. The three parties continue to see this as the primary responsibility. The decision paper states: “The coalition affirms that the effects of energy price increases can only be effectively limited by quickly implementing the electricity price cap, skimming off and redistributing chance profits and limiting the increase in gas and heat prices through regulation at federal level. “

Since the implementation of many federal measures is still open, the financial framework of the Berlin relief package cannot yet be finally quantified. It is clear that the hardship fund that has been decided so far must be increased to over 380 million euros.

The coalition assumes a sum of 800 million to 1.5 billion euros and announced a supplementary budget. In addition, “credit authorizations of the Senate are to be exhausted” and “unplanned expenditure is to be limited to what is urgently needed”. At the federal level, the coalition wants to work to suspend the debt brake in the coming year.

Relief in Berlin and in the federal government

Financing still unclear Successor to the nine-euro ticket probably from January Federal-state dispute over relief package Kühnert accuses Söder of “political games”. From when, how long, where valid? The most important questions and answers about the 29-euro ticket in Berlin

The leader of the CDU parliamentary group, Kai Wegner, was basically satisfied with the content of the relief package. “Better late than never,” he said on Monday. “Now it’s all about quick and easy implementation. The Senate has not yet delivered. The heating season has started, prices continue to rise.”

Wegner criticized the plans to protect only the tenants of the state-owned housing companies. “In the housing alliance, Ms. Giffey must now find a solution for all Berlin tenants, including those outside of urban societies.”