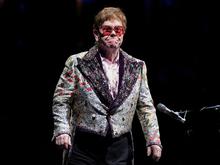 British pop legend Elton John is honored with an appearance at the White House. The singer of hits like “Rocket Man” and “Candle in the Wind” will perform at an event in the White House garden on Friday, a spokeswoman said on Tuesday. The evening will be hosted by US President Joe Biden and First Lady Jill Biden, themed “A Night When Hope and History Rhyme”.

The evening will celebrate the “unifying and healing power of music” as well as “the life and work of Sir Elton John,” the White House said. “Everyday historians” would sit in the audience – such as nurses, teachers or people who campaigned for mental health or against discrimination. According to the White House, Biden and First Lady Jill are to give a speech.

John’s Farewell Yellow Brick Road global farewell tour kicked off in September 2018 in the US state of Pennsylvania and is scheduled to end in Sweden in July next year. The 75-year-old was named the most important solo artist and third overall after the Beatles and the Rolling Stones on Billboard’s 2019 list of the greatest musicians of all time. (AFP)