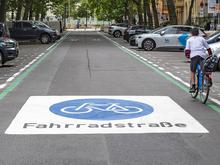 Our newsletter, which has now been subscribed to around 268,000 times throughout Berlin, brings you the latest and background information from your district. The week always begins for us with Lichtenberg and Treptow-Köpenick. You can order our newsletter from these two Berlin districts, like all other district newsletters from the Tagesspiegel, here free of charge: tagesspiegel.de/districts.

Among other things, Robert Klages writes about LICHTENBERG and its Polish partner district BIALOLEKA:

Julia Schmitz writes about TREPTOW-KÖPENICK on the following topics, for example:

Urban nature and more topics from Berlin’s districts in our free newsletters at www.tagesspiegel.de/bezirke

By the way, in our newsletters from Lichtenberg and Treptow-Köpenick and of course also in all other district newsletters from the Tagesspiegel, you can refer to birthdays or other special days of friends, life partners, relatives, neighbors, colleagues, business partners, etc .to point out or congratulate yourself with a few nice words .Write to our authors, whose e-mail addresses you will find in the newsletters.