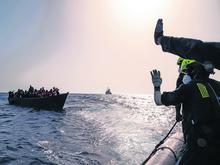 The German sea rescue ship “Humanity 1” with almost 400 migrants on board has received the approval to dock in southern Italy. As the Berlin organization SOS Humanity announced on Tuesday, the port of Taranto (Taranto) in the Apulia region was assigned to it. This brought “joyful relief” to the 398 people rescued in the Mediterranean, because some had already spent around two weeks on the ship.

At the same time, however, the NGO criticized the fact that the assigned port was a 42-hour drive away. The “Humanity 1” was cruised off the south coast of Sicily before making her way to Puglia.

“The situation is precarious, water and food supplies have been heavily rationed, the weather is expected to get worse again,” the German organization tweeted. While the “Humanity 1” headed for a port, the Spanish rescue ship “Open Arms Uno” was waiting for permission from Italy.

402 migrants and one body on board

According to the crew, there are 402 migrants on board, as well as a body that was discovered among survivors during a rescue operation on a wooden boat.

Civilian rescue ships often have to wait for days before Italy assigns them a port. They accuse Rome of harassment and delays. According to reports, it is often difficult for the authorities to organize a port – after all, the reception of migrants and refugees, including registration and medical tests, has to be prepared there. According to the rescuers, the EU country of Malta has not responded to inquiries for a long time.

Again and again, many people dare to make the dangerous crossing across the central Mediterranean from North Africa because they hope for a better life in the EU. According to the United Nations, 1,039 migrants died or went missing this year alone. Rome registered more than 68,200 migrants arriving on Italy’s coasts in 2022 – in the same period last year there were a good 43,200. (dpa)