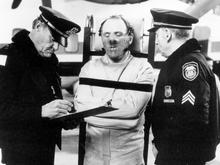 Actually, he can only be seen for 16 minutes in the entire film. But they have it all. Anthony Hopkins made film history with his portrayal of the cannibalistic killer in The Silence of the Lambs, the worst villain since Norman Bates in Psycho. He has been in front of the camera for over 30 years. Julia and Clara Kuperberg, known for their star portraits, look back on the life and work of a Welsh baker’s son who, in his mid-50s, made it into a charismatic character actor in Hollywood cinema.

It didn’t look like that at first. The future crowd favorite did not have a good start. He was a bad student: “I was just stupid. I didn’t understand anything at all.” The career of young Anthony was correspondingly rocky. After military service, in 1961 he was admitted to the Royal Academy of Dramatic Art in London. Discovered four years later by the legendary Sir Lawrence Olivier, he became his understudy at the Royal National Theatre. (“Hannibal Hopkins & Sir Anthony,” Arte, Sunday, 10:05 p.m.)

The theater was not his world. “I didn’t want to be a big Shakespearean actor. I didn’t want to spend my life standing on stage in pantyhose.” So, at 37, he made the leap to Hollywood. That almost went wrong. Hopkins had been a heavy drinker for some time.

An illness he overcame – with which he still flirts: “I love drinkers, they’re the best,” he once said of Peter O’Toole, who helped him with his career.

First, however, Anthony Hopkins got caught in a destructive maelstrom. The moody Briton was considered unreliable. He stopped filming. If he hadn’t made his breakthrough as an actor at some point, “I would have become a criminal”. The 1978 thriller “Magic” became the key film. Hopkins shines in the role of a ventriloquist who hears voices and is afraid that others will find out about his personality disorder.

Now I can also make bad films, it doesn’t matter.

For the first time, that diabolical sparkle that makes the Brit so unique flashes up here. The role of the doctor in David Lynch’s masterpiece The Elephant Man eventually brought Hopkins to the attention of Jonathan Demme, who cast him as serial killer Hannibal Lecter.

This thriller became style-defining. Hopkins didn’t play the mad cannibal killer as a lunatic. On the contrary, he emphasized his sensible, his civilized – even distinguished – side. Only once, when he lets out that snarling hiss, does the animalistic monster break through.

Hopkins made this villain iconic with the sensibility of a psychoanalyst. The Academy Award for Best Actor, which he received for this performance in 1992, was a great relief: “I took the Oscar and thought: Now I can also make bad films, it doesn’t matter.”

There are a few of them. For his performances in mediocre films, including “Seasons of a Marriage” from 1981, he was nominated several times for the worst actor for the Golden Raspberry.

He was Adolf Hitler in The Bunker (1981) and Quasimodo in The Hunchback of Notre Dame (1982). He only accepted some of these role offers because he was afraid that someone else would get the part. In better films like Oliver Stone’s 1995 “Nixon” he brought an inimitable intensity to the fallen US President. Unforgotten is the role of the all-too-perfect butler in the drama “What Was Left of the Day”.

With lush archive material and numerous film and talk show clips in which the two-time Oscar winner speaks openly about the dark side of his life, the documentary creates a complex mosaic about the lovable bad guy. In 1993, the Queen even knighted him. He doesn’t have many friends. How he endures loneliness at the pinnacle of fame? With “a psychiatrist and a kick in the butt”.