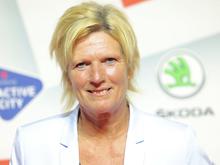 ZDF commentator Claudia Neumann made a courageous statement in the debate about the banned “One Love” bandage at the World Cup in Qatar.

The 58-year-old sat in the press box for Monday night’s USA-Wales game at Al-Rajjan’s Ahmad bin Ali Stadium wearing a black T-shirt with a rainbow heart printed on it. She also wore a colorful bandage on her arm, also in the colors that stand for diversity and tolerance.

“Welcome to the Ahmad bin Ali Stadium for game three on day two of the tournament. It could have been a legendary, proud World Cup day, but let’s all spend it discussing the expressions of solidarity that we saw at one point. Namely today with the Iran team,” said Neumann at the microphone. (dpa)