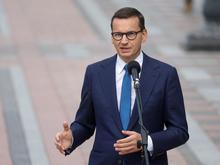 Poland wants to resist the EU Commission’s plans to cut EU funds for Hungary. “Poland will resist with full force any action taken by the European institutions aimed at illegally depriving a member state of funds – in this case especially Hungary,” Prime Minister Mateusz Morawiecki said on Sunday in Kamienica, Silesia.

However, there are signals from Budapest and Brussels that a solution to the dispute is being worked on.

In order for the country to actually cut money from the EU budget, at least 15 countries with at least 65 percent of the EU population would have to agree to the proposal. (dpa)