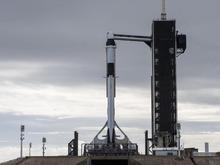 An unmanned mission to the International Space Station (ISS) took off on Saturday with almost 3,500 kilograms of cargo for scientific experiments and to feed the crew on board.

The “Dragon” freighter is scheduled to dock with the ISS on Sunday around 1.30 p.m. German time and land back on earth after about a month. It is the 26th supply mission by commercial operator SpaceX in cooperation with NASA, the US space agency said.

According to NASA information, on board are, among other things, solar panels for power supply, a special type of tomato for astronauts to eat healthier and a blood test that is intended to facilitate medical diagnoses of people in space.

On Tuesday, the initially planned “Dragon” launch from the Cape Canaveral spaceport was canceled due to bad weather. SpaceX’s first Dragon capsule flew to the ISS in 2012. (dpa)