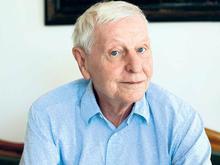 Enzensberger was born on November 11, 1929 in Kaufbeuren and grew up in Nuremberg. From 1949 he studied literature, philosophy and German in Erlangen, Hamburg, Freiburg and Paris. First he worked as a critic in the editorial office of “Radio-Essay” in Stuttgart, in 1965 he moved to Berlin and founded the magazine “Course Book”. It quickly became the most important magazine of the New Left

From the 1970s Enzensberger published on poetry. From 1980 he lived in Munich. Here he worked as editor of the magazine “TransAtlantik” and the publication series “The Other Library”. Among other things, he received the Büchner Prize in 1963, the Heinrich Böll Prize in 1985 and the Ludwig Börne Prize in 2002 for his life’s work.

Hans Magnus Enzensberger died in Munich at the age of 93. tsp