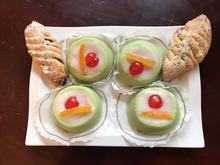 Now just leave everything behind and travel to the sea in Sicily, that would be something! And then eat out with a view of Mount Etna and its trail of smoke in the sky. Nicolò has Sparacino in his shop for short escapes without packing your bags and feeling ashamed to fly Terra Verde Country Food a wonderful selection of food from the largest island in the Mediterranean, imported directly from small producers. In addition to the original store, he recently opened a branch in Schöneberg at Friedenauer Rheinstraße 18, right next to the Sardinen-Bar (Grunewaldstraße 78, Mon to Sat 11 a.m. to 6 p.m.).

Citrus from the family’s organic farm in Ribera shines outside, including massive cedro lemons, which are just in season. Under the skin they have a broad strip of mesocarp that is sliced ​​thinly and combined with cedar juice, olive oil, fennel and arugula make a salad that foreshadows spring to come in winter (read more about citrus on page B29 of our Yuzu article).

The shelves are full of things that can be well packaged for a journey: chocolate from the baroque town of Modica, which is produced according to an old recipe without a modern glaze, and of course pistachios, the best examples of which grow around the small town of Bronte on the western slopes of Mount Etna. In Sicily, pistachios have long since ended up not only in sweets, but also in hearty fish sauces and pasta fillings. You can taste it at home, for example with a glass of Sugo Gambero Rosso e Pistacchio (Il Faro, 12 euros). Take a pack of curly Busiate from Trapani with you.

If you want to go even faster: For the first hunger pangs, there is a lunchtime offer, for example Arancini, fried rice balls filled with ragu or vegetables (7 euros), which glow almost as intensely as the citrus fruits in front of the door.